A mass shooting in Monterey Park, California, which is located inside Los Angeles County, where people were celebrating the Lunar New Year festival left at least 10 dead.

At least 10 people were killed during a mass shooting at a Lunar New Year celebration.

A suspect remains at large after at least 10 people were killed and multiple others were injured in a mass shooting at a ballroom dance club in Monterey Park, California, late Saturday in an area where people were gathered to celebrate the Lunar New Year, authorities said.

Meyer said the suspect, whom authorities earlier identified as a male, fled the scene after the shooting and remains on the loose. No description of the suspect was immediately available.

People were "pouring out of the location screaming" when officers arrived at the dance ballroom around 10:30 p.m., Meyer said, adding that officers entered the club as firefighters treated the wounded.

Meyer said no further information on the firearm used was available at this time.He said it’s too early in the investigation to know whether the gunman knew any of the victims or whether it was a hate crime.

He also said police were investigating another incident at the Lai Lai Ballroom in the nearby city of Alhambra to see whether it was connected. No injuries were immediately reported in that incident.

A police officer stands near a scene where a shooting took place in Monterey Park, Calif., Sunday, Jan. 22, 2023.

Sources told Fox News that police believe the two incidents are connected and that they know the suspected gunman's identity. The sources said a "high-powered assault rifle" was used.

[Biden] "directed her to make sure that the FBI is providing full support to local authorities, and to update him regularly today as more details are known," Jean-Pierre wrote.

A heavy police presence responded to the 120 block of West Garvey Avenue in Monterey Park, a city in Los Angeles County, according to photos and videos on Citizen, an app designed to allow residents to report crimes in their local area.

The Monterey Park Fire Department told Fox News Digital a mass shooting took place, but could not confirm how many people may have been struck by gunfire. Monterey police have yet to release any information on the shooting, but said a news conference is scheduled for 7 a.m. PST.

Sgt. Bob Boese of the sheriff's department had earlier confirmed to the Associated Press that the shooter is a male but did not reveal any other identifying information.

Officials said the Lunar festival scheduled to take place at Monterey Park later Sunday was canceled "out of an abundance of caution."

Many people gathered in the city Saturday night for a Lunar New Year celebration of the "Year of the Rabbit."

A police vehicle is seen near a scene where a shooting took place in Monterey Park, Calif., Sunday, Jan. 22, 2023.

The festival kicked off Saturday morning and featured "various types of entertainment," the website added. And: "A carnival fun zone will be featured in parking lots at the corner of Garvey and Lincoln Avenues."

"Past Lunar New Year events in Monterey Park have drawn crowds estimated at over 100,000 visitors per day from all over the Southern California area," it also said. 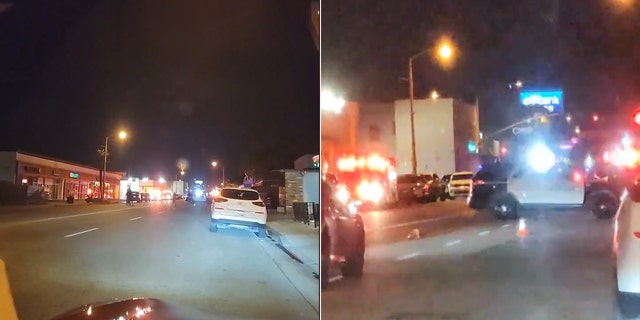 A heavy police presence was reported in Monterey Park, California on Saturday night amid reports of a possible mass shooting.  (Citizen App)